The  Chihuahua is a small breed of dog.
The name is due to the capital of the Mexican state of the same name where its first farms were born, where it is known as  chihuahueño  (approximate pronoun “ci-ua-uegno”).

Chihuahuas can be short-haired or long-haired.

In the FCI standard of the breed all colors are allowed and accepted except the merle, while the weight accepted in the dog shows varies from 1.5 kg to 3 kg. However, many individuals exceed the weight required by the FCI standard.This does not imply that they are not pure Chihuahuas.

It has a tail carried high, the head has the shape of an “apple”, the ears are wide open and the junction is at the height of the eyes, which are round and not protruding; has a set of teeth that requires care and attention. The Chihuahua is by far the smallest breed in the world: contrary to what one might think, however, its physique is robust and very compact. Its size makes it particularly suitable as a companion or parlor dog, but it is very active. It often barks to defend itself, like all small dogs, but it is not particularly aggressive.

Today’s FCI standard requires a very round, apple-shaped head and a very marked, deep and broad stop as the forehead is rounded above the base of the muzzle.

The “cervid” type, with a finely chiseled head, long neck, thin body, long limbs is, on the other hand, a type not sought by the FCI standard, but is much more similar to the first subjects exposed to canine manifestations, so they are thought to be Chihuahuas with the least man-made DNA. Over time, due to the change in the FCI standard, it has been less and less selected and has been excluded from dog shows, as it is considered not very competitive compared to subjects with the “apple head”, but this does not mean that it is not a Chihuahua pure. It is widespread in the breed’s home state, the Chihuahua, as it is considered the original. Dogs with too short snouts, bulging eyes in a “caricature” style are, out of fashion, passed off as Chihuahuas; in reality they are the result of crosses with brachycephalic dogs of Asian breeds.

Eyes wide apart, very expressive, not bulging, perfectly dark are highly valued features. The ears, set low in relation to the head, are large and erect, but the tip must be slightly rounded. The neck is slightly arched, not particularly long. The trunk is very compact, with a broad and defined thorax and a retracted abdomen. The hind legs are somewhat angled at the knee. The tail is set high, it can be straight or in a semicircle; the twisted one is considered a defect in the expo.

In the short-haired variety the hair is well laid over the whole body, slightly longer on the neck and tail. It is shiny and its texture is soft.

In the longhaired variety the coat must be fine and silky, smooth or slightly wavy. It forms fringes on the ears, neck, on the back of the forelegs and hind limbs, on the feet and on the tail.

Colors of the chihuahua

In the breed standard, with a change in effect from 21 October 2009, all colors are allowed except for the merle.

The merle gene changes the base color of the coat, causing patches to appear.

It consists of two alleles: M (merle) and m (non merle), where the merle is dominant.

So to have the merle dilution on the base color it is enough that the gene is present on one of the chromosomes.

This means that if we have a merle puppy, it is certain that at least one of the parents is a merle.

The merle does not exist in nature as a color in the breed; its recent and widespread diffusion therefore suggests that this is not due to a spontaneous mutation, but rather to mating of Chihuahuas with other breeds (for example dachshunds and spitz). Chihuahuas merle would therefore not be purebred, but crosses between different breeds. For this reason – and for the various problems that the merle gene brings with it – several countries (such as Germany and England) have banned the reproduction of merles. In the United States, several movements against the reproduction of merle chihuahuas have also been born, which petitions the American Kennel Club to exclude the merle from their registers. In fact, the merle, especially when it occurs in the homozygous form, involves serious pathologies such as blindness and deafness.

Several studies have shown that in merles we find more often lack of Tapetum Lucidum (a reflective layer placed behind or inside the retina of the eyes that increases vision in low light conditions), lack of retinal pigment, microphthalmia, micro cornea, microcora, middle ear infections, infertility, haemophilia.

Congenital problems of merles can appear at any time, and it is strongly not recommended to mate two merle chihuahuas because, since both are carriers of the gene, the likelihood that the puppies exhibit pathologies increases even more. 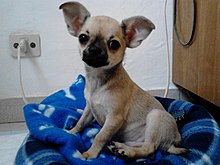 Chihuahua of a few months

Contrary to what it may seem from its small size, it is not a weak dog.

He is extremely brave, hyperactive, jealous of his things and strongly determined.

It has the characteristic of being lively and inclined to play, but at the same time it can be an excellent companion dog if it is allowed, to its great satisfaction, to spend time in the arms of its owner, towards whom it nourishes extreme confidence and from which it he drives around in the same position, without giving the slightest impression of impatience, in every place. It is a dog so easily managed that most hotels, public places and tourist places, even those where it is normally forbidden to bring animals with you, accept it, as long as it remains in the arms of its owner.

He is considered a companion dog, but his tenacity makes him an excellent guardian.

The nature of the dog is certainly very sweet and affectionate; in fact the Chihuahua manages to establish a very intense relationship with the owner.

It is a breed that enjoys coexistence with other Chihuahuas very much, with whom it establishes close relationships governed by the logic related to the life of the pack.

If accustomed since kittens (within the first three to four months of life), they will be able to share their territory with one or more cats who will be considered an integral part of their pack and with whom they will establish excellent relationships both in play and in other daily activities.

Most of the females are excellent breeders of puppies and do very well the task of bringing their litter to the finish line of weaning.

They greatly appreciate the cooperation of their human friend in managing the offspring. 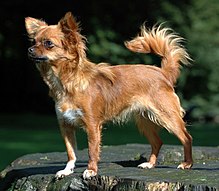 He is an easy dog ​​to train and manage.
Generally he is calm and calm if not disturbed, but he is very affected by the mood of the human beings with whom he lives.

It is a very sensitive, habitual and attentive dog.
He studies his master all the time and uses various tricks to be pampered. Individuals who bark a lot and growl are temperamentally overbearing, dominant and overprotective of their owners.

This type of behavior is usually the result of mismanagement on the part of the owner who has allowed his dog to believe that he is the leader of the family in which he lives.

The Chihuahua from a puppy must be accustomed to understanding that he will get the attention only on the decision of his owner, and not on request.

This way of approaching your Chihuahua from the age of two months will make it a serene, balanced, sociable and non-aggressive dog.

The stereotype of the aggressive Chihuahua is not given by the crosses that occurred in ancient times with the dwarf pincher; a purebred and trained Chihuahua with a little firmness will prove to be a docile and calm friend, but also very courageous and determined.

Very often he can show a little desire for independence, a right education can counteract his predisposition to dominance.

Walks in the park and playing outdoors help keep him fit: even if he is small in size, he needs a lot of exercise.

He lives with children, but he must be respected and treated with care, not like a toy; falls from a person’s lap can cause serious health consequences for the puppy.